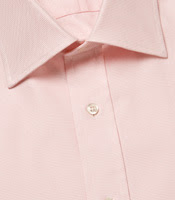 If years ago I hadn't learned a lesson about paying attention to parenthetical phrases, how would I know now that in Denmark, saying something about "Tycho" is akin to the American phrase-- which I have never understood--"I've got to see a man about a dog." They both mean, "I've got to go." Why someone needs to be that informative about it has always eluded me.

Nevertheless, paying attention to what's inside a set of parentheses started sometime in the 60s when a high school French teacher we had gave a pop quiz on vocabulary. The teacher was one of the school's more memorable characters, who was without a doubt the first man I ever saw in the 60s wear a solid colored pink dress shirt. We were an all-boys high school and things like this caught our attention. We also suspected Mr. Haas lived in the 'Village', which helped explain everything we speculated about him. Regardless, we learned.

Well, no one got a 100. This positively delighted Mr. Haas. He tripped up a classroom of smart Alecs because he chose a word from the book's text that was defined in parentheses. Only one of the 30 something kids in the class correctly answered that the French word banlieues meant suburbs. The kid got something else wrong, so he didn't get a 100. He too, was imperfect.

I have never forgotten this. The class protested that the word was not in the book, but Mr. Haas happily showed it off to all the eyes that hadn't paid attention.

So, when in Tuesday's Science Times I took in the story about the exhumed Danish astronomer, Tycho Brahe--who has never been a household name in my house--I happily reflected on my lesson in learning to pay attention to what's inside the brackets. There was a good deal going on in this guys' life, including providing the plot line for 'Hamlet'. The news story is worth reading.

Explanations of less than natural causes have been advanced regarding his death at age 54. At the time however, it was believed he succumbed to a bladder disease caused by not relieving himself while drinking profusely at a banquet. This is what is explained in the article's parentheses. Danes with a sense of history and wit excuse themselves from the table by invoking his name as they head to the restroom.

Alas poor Tycho. There but for the grace of God, went I.