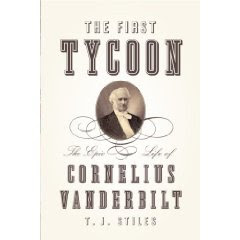 How many people could have lived till 1877 and still been able to say George Washington was president when they were born? Turns out Cornelius Vanderbilt was at least one of those people.

Vanderbilt (1794-1877) is the subject of what is reviewed to be an entertaining biography by T.J. Stiles, that is nearly as long as Vanderbilt's life, and, like the man's life, hardly boring.

When I read about someone's age in brackets I always imagine what era they lived through. Who was president when they were born, what inventions were new to them, how did they get around? What was around to see? What was life like?

Horses, steamships and trains were the going means of motion then, and Vanderbilt was involved in all three. Big time. He lived through 18 presidencies. I haven't lived to be an octogenarian, but at 12 presidencies so far it's still hard to think I might match that.

As mentioned in prior postings, I love to string the linkages back. It was only fairly recently I began to realize that my own early schooling was probably in someone's hands who was born in the late 1890s. (I'm sure Mrs. Cornell was 19th century.)

And now because of T.J. Stiles's book, The First Tycoon, I know why Cornelius was known as The Commodore. And then of course I can understand why the hotel on 42nd street, just east of Grand Central Terminal (along Vanderbilt Avenue) that is now The Hyatt was once The Commodore. (The renovation work was extensive.)

If I get old enough, I wonder if looking back I'll think Harry Truman was as quaint as George Washington?

Only time will tell.