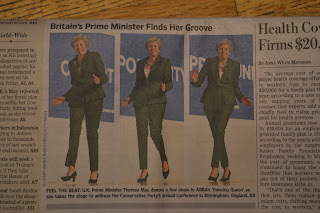 The competition for the World's Most Photographed Woman is now OVER.

It ended quickly this morning when the above photo appeared on the front page of the Wall Street Journal. The caption tells us she bopped onto the stage at the Conservative Party's annual conference in Birmingham, England to Abba's tune of  'Dancing Queen.'

The Prime Minister is not the Queen, but she was having fun with herself over the attention she got when she was videoed boogieing with some South African dancers recently. 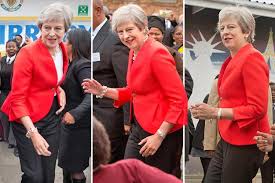 I have no idea, but my guess she was lambasted for bustin' a move. I also guess the press in England is even more polarized than here.

The Prime Minister is on a bit of shaky ground and is hearing footsteps from Boris Johnson, her former foreign secretary, who is now seen as someone who will challenge her for the top spot.

Boris of course is an unmade bed who needs a haircut. No doubt he'd be colorful as well, just not in the same way. Whatever happens in British politics, just like Rick and Ilsa always had Paris, we'll always have Theresa defeating Chancellor Merkel for the crown of World's Most Photographed Woman.