Move over Sherlock, contemporary and Edwardian. Move over Sam Spade, Philip Marlowe, Kurt Walander, DCI Banks. Inspector Lewis, Inspector Morse, Hercule Poirot, Mike Hammer and any other police procedural you can add to the heap, because with any luck we will soon be treated to a min-series, or a movie using Bernie Gunther, a Berlin gumshoe who survived the Battle of Verdun, saw uniformed police and later detective duty at Berlin's equivalent of Scotland Yard in 1939—the Alex—who solved crimes for Nazis, but was not himself a Nazi, who respected Jews and who didn't like the direction the Hitler winds were blowing. If Tom Hanks gets his project going, we will have the screenplay version of Commisar Gunther's exploits.

I had never heard of the Bernie Gunther series. It wasn't until the author Philip Kerr passed away in March of this year and I read about him on the obituary page that I decided to try one of the books. His kind of crime novels were right up my alley.

Bernie doesn't do crossword puzzles with lightening speed like Inspector Morse, but he does possess a knowledge of German opera, music and mythology. For a cop, he is an amalgam of street sense, common sense and scholarly sense. He is not without drink, smoke, and an occasional tryst with a female. He fits the mold of the cerebral detective passing through life as if it is an obligation he has to go through with to get to nowhere. But he is more than willing to put up with it, and put up with it with integrity.

Kerr was prolific. and his death at 62 from bladder cancer has put a full stop to any more tales about his favorite detective. Somewhat like Canon Doyle, Kerr tried to stop writing about Bernie, but his fans wanted more. He delivered.

To me the amazing thing about Kerr is that he was Scottish-born, but put Bernie in the thick of Germany as it moved from post WW I, to the Cold War post-WW II era, and the era of the Ivans, the Russian occupation of Germany,

Through the magic of the Internet I watched a Philip Kerr interview with Late Late Show host Craig Ferguson. Mr. Kerr explained how he would spend a great deal of time in Germany to absorb the details which made their way into his novels.

My guess is as fiction his Gunther works are novels. But I would really classify them as historical fiction since he inserts his character into the narrative encountering the real deal: The brothers Albert and Martin Bormann; Gerdy Troost, Hitler's decorator who took over after her architect husband Paul passed away; Grunther's boss, Reinhard Heydrich, who reported to Heinrich Himmler, both architects of the Final Solution.

The obituary mentioned 'The Berlin Trilogy' a book that has three novels between its covers. Each one is a bit of a short novel. They give you the flavor for what the Nazi-hating and honest cop is up against. Also, the atmosphere as Germany heads into war with Hitler at the helm.

There is a history lesson to be learned about pre-war Germany and how most people in Germany were not Nazis, and despised Nazis. Of course the Nazis loved themselves.

After WW I there was an absolute alphabet soup of political parties,German military forces, and civilian and military police. Gunther works out of Berlin, but Berliners are not liked at all by the rest of the German people. Hitler, an Austrian, doesn't like Berliners. He prefers Bavarians, and this is reflected in the people he has surround him. The country is a federation of states, much like the United States, with each state as different from the other as if they were separate countries.

Borders between countries were elastic, and Poland was viewed as an enemy. Hitler's rise to power was sown as early as the 1920s. Gunther, born sometime in the late 1880s, early 1890s considered the Weimer Republic the good old days. But they were not to last.

When I bought 'The Berlin Trilogy' I failed to realize I has purchased three books. The size of the paperback looked daunting to me. Only once I dove in did I realize I was getting three for the price of one. And I finished it quickly.

This gave me confidence to read 'Prussian Blue,' a singular novel that is as big as the three novels combined in 'The Berlin Trilogy.' In 'Prussian Blue' Gunther is plucked from his job in Berlin to look into how a member of Hitler's inner circle. Dr. Flex, was assassinated with a long range rifle  as he stood of the balcony of Berghof, Hitler's residence in Berchtesgaden.

Martin Bormann has reached out to Gunther's boss because he wants the best investigator there is to solve the case before the Alpine compound of buildings becomes host to the Leader's 50th birthday in April 1939.

Martin Bormann is Hitler's right-hand strongman, whose power is immeasurable and grows with each sunrise as war approaches with Poland. The book toggles back and forth between April 1939 and October 1956. There are way more April 1939 chapters than 1956 chapters, but the presence of the 1956 chapters are a sure clue Bernie makes it off Hitler's mountain. But what happens along the way?

Hitler is always referred to, but not really introduced to the narrative directly. We learn of the Leader's dislikes: cats, cigarette smoke, women drivers and Berliners. He likes nature, trees, birds, wildlife, fresh air, fresh fruits, tea (never British) and vegetables. Without knowing more about him, you might even like him.

Gunther fairly quickly gets to work, aided by the buzz of methamphetamines, drugs it seems that are widely used by the populace of Hitler's mountain. Hitler it seems likes to rise late in the day, but work through the night. Those around him have thus adopted an almost  24/7 wakefulness in order to accommodate all that the Leader wants to have done.

The Leader is not aware of the assassination, so Bormann puts Bernie on a strict deadline: results before the Leader gets to the mountain for his birthday bash. If not, Bernie understands his own expendability. Results come fast.

Bernie gets help from Gerdy Troost, Hitler's personal decorator/designer. This is a woman who believes deeply in Hitler and the "New Germany" but who can also see the outright shamefulness of Martin Boormann. She helps Bernie.

In real life there is a Gerdy Troost and she is every bit the Leader's chief designer, professionally critical of anything Albert Speer builds. Gerdy is described as being with a decent figure, but of a fairly plain face. Pictures of Gerdy support the description. Philip Kerr does his research as if transported back by a time machine. 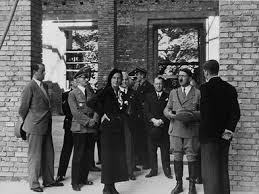 Gerdy Troost passed away in 2003 and was 98. It is almost hard to believe that someone who so prominently occupies time with Bernie and Hilter could possibly live into a the 21st century.

But then again, that is the appeal of Philip Kerr. His characters did exist.