You Should Have Taken Uber 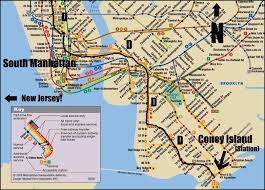 The NYT metropolitan mass transit reporter, Emma G. Fitzsimmons, recently had a piece on how ridership has fallen on the city's subways and buses. (I love the part of someone from Texas being assigned to write about the region's transit systems.) Several reasons are given, and Ms. Fitzsimmons gives space to some of the official explanations, like people are using Uber, and to how the everyday commuter is coping with what is perceived to be deteriorating service, especially on weekends. One person in Brooklyn is quoted as saying they bought a car! because they got tired of all the delays.

Luckily, I no longer have to rely on the system for daily commutes. One of the people she quoted was waiting for an N train. This reminded me to tell her that perhaps she knew this, but the N and R trains have been referred to as Never and Rarely for their poor on time performance.

It's enough to hear stories from your colleagues and neighbors about poor service, or read about it, but imagine hearing a reference to it in a TV drama series. But that's exactly what happens in the latest 'Homeland' episode.

The casting in that series is pitch perfect. So, when there is a Russian rezidentura spymaster set to meet Saul Berenson, the CIA spymaster, you get a well-acted and well-voice inflected portrayal of a Russian, speaking heavily accented English.

Saul, bushy, hairy Saul has arranged to be met at what is clearly Coney Island, at a bench, as he sits in the sun and stares out at the water. It is winter, so the beach is empty. Saul fits in perfectly, A Jewish man at the tip of Brooklyn in an overcoat, looking at the water on a sunny, off-season day.

Saul waits, and his Russian counterpart finally comes across the sand, more than a little miffed at being late, and explains to Saul that the damn trans are a pain to take to Coney Island. He's obviously complaining about the service. So even on 'Homeland,' the script writers are salting in comments about the state of NYC Transit from a Russian spy.

Coney Island is at the tip of Brooklyn, and is serviced by lines that have the absolute longest routes in the system. There are trains that come from the northermost parts of the Bronx, down to Brooklyn. I reminded Ms. Fitszimmons that mass transit doesn't necessarily guarantee rapid transit.

It would have been leg-smacking, fall off the couch funny if Saul reminded his Russian counterpart that if he took the N train to Coney, didn't he realize that it stood for Never, and that most people take Uber anyway these days?