I Hear the Train A Comin' 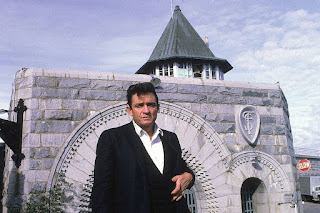 Anyone who has been following the output of the Cash family as long as I have will instantly recognize the above title to be the beginning of one of Johnny Cash's biggest hits: 'Folsom Prison Blues,' released in 1957.  The above photo is from the day in 1968 that Mr. Cash famously gave a concert there. A whole new audience for live music was recognized that day: inmates.

Johnny wasn't himself ever a prisoner there, but he was there to entertain. The late 60s, with concerts like the one at Folsom, and later San Quentin, propelled his career yet again.

The other night at the NYPL interview Johnny's daughter Rosanne told the audience that her father was a musicologist. He had them categorized in his head. He could name and sing 40+ songs about a train; 40+ songs about a dog, etc. I always remember Mr. Cash's boast that he would tell anyone who would listen when he was starting out: "Hello, I'm Johnny Cash, and I know about a thousand songs."

'Folsom Prison Blues' is of course a song about being an inmate and hearing a train, and dreaming of getting out. The WSJ has now thrown water on the hearing the train from within the prison part. Mythbusters.

The prior posting already posed the question of how likely would it be that the day after Johnny's daughter Rosanne gave that interview at 'Live at the NYPL' on April 19th, that a WSJ A-Hed piece would appear the following day with the story that Folsom Prison is working out the kinks of creating a nature trail for the general public, named after Johnny Cash, on the prison grounds. And that the only train whistle that might be heard is that of a miniature railroad from nearby zoo. Oh well.

Yes, you did read that correct. Walk, hike and bike around the grounds, while passing Cash statuary, fake guard towers, and 7-foot guitar picks. You'll be close to the prison walls, but not too close. Flipping contraband over the walls will not be encouraged.

The whole story seems a bit odd at first, but it apparently has the approval and cooperation of the Cash family. Johnny's daughter Cindy has already set the planning people straight about depicting Johnny in a cowboy hat atop a horse. Thank God.

Cindy explained to the powers to be that her father was never comfortable in hats, was not seen in them, and didn't feel comfortable around horses. His family raised cotton, not cattle. Not all Country Western stars sing and pluck from a saddle.

And as strange as it sounds to have non-inmates orbiting the world outside prison walls, I can truthfully say my friend and I did once do just that when about 10 years ago we visited Mount McGregor, a medium-security prison in the town of Moreau, Saratoga County, NY. It was sort of like landing on the part of the Jail Square in a Monopoly game that says, "Just Visiting."

We weren't there as entertainers by any means, but we did make a Corrections guard think we might have been comedians. Anyone familiar with the Mount McGregor area would know that on the prison grounds sits Ulysses S. Grant's Summer Cottage Historic Site. This is where the former general and president passed away from esophageal cancer in 1885. 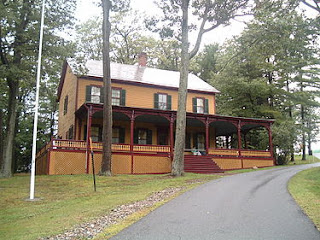 In developing this piece I found out the prison closed in 2014. But back when we visited you could easily access the cottage if you announced yourself at the toll booth-like guard house. No reservations were required.

Tuesday is a so-called Dark Day at Saratoga racetrack. There is no racing. So, being not quite culture freaks, but still interested in history, we made plans to take in the cottage during one of our annual pilgrimages to the Mecca at the finish line.

I don't really remember if I neglected to tell my friend who was driving that he should slow down as we approached the guard booth, or, if I did, and he just plain didn't listen to me, or even hear me, but the result was we somewhat shot through the area. Neither of us saw anyone anyway. And there was no crossbar to be lifted.

What happened next was that our path to the top of the drive became blocked by a quickly appearing Corrections vehicle. A very big and sour looking prison guard emerged and basically asked us what did we think we were doing? This was no time for being wiseguys. (Think 'My Cousin Vinny') We apologized for not stopping. We explained we didn't see anyone. We were not asked to get out of the car, but were asked the questions they would have asked us at the booth: What were there for, and did we have any firearms with us? No inspection of the vehicle was made, and we proceeded toward the Grant Cottage.

The one takeaway I remember from the rather simple dwelling was that the docent explained that when Grant passed away on the morning of July 23, 1885, the clock on the mantle was stopped to reflect the time of death. Apparently, this was something people did when somebody passed away at home. I think the clock was stopped at 8:20 or so.

We were parked in a small lot clearly within proximity to chain link fencing and razor barb wire. The prison was apparently established in 1976 as first a minimum-security facility. Apparently it was very minimal. The place earned reputation as 'Camp Walkaway' because so many inmates just plain walked off the grounds.

As we were getting back in the car we noticed two guards standing near an inmate who was shoveling hay, or compost into a wheelbarrow inside a three-sided shed. Work detail. Cool Hand Luke.

I've always liked Johnny Cash. And now Rosanne Cash. However, I have absolutely no plans to visit Folsom Prison as an inmate, or as a recreational walker/hiker/biker/jogger.