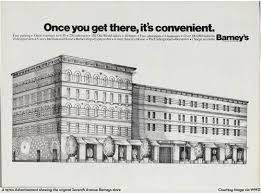 It wasn't that long ago that Thursday meant the HOME section in the NYT. For some reason this section seems to have disappeared into the online edition. I miss it, especially anything to do with gardening.

In its place the Times has made a separate section called 'Thursday Styles.' This basically means fashion. Fou-fou clothing that I've never seen on anyone. Of course, I don't get to places where people might actually wear what is being shown in the section. I am on no one's list to be invited to fundraisers for any cause. The small amount of money that I do donate doesn't require me to appear anywhere in person to try and look philanthropic. I like it like this.

I am however getting a huge kick out of the news that Barneys has moved back to its roots: 7th Avenue and 17th Street. The neighborhood is now trendy, and a desirable place to shop and live, unlike what it was when I was buying suits there in the late 60s.

There seems to be an outpouring of nostalgia hitting the 'Thursday Styles' pages driven by Mark Lee, the chief executive of Barneys New York who waxed and waned in February's issue of Vanity Fair about his first purchase at the store when it was still in Chelsea.

Vanity Fair is another magazine, among the many, that never hit my mail box. I only get to see the issues when I go to get my ears annually cleaned of impacted earwax (TMI?) at a 55th Street ENT. The doctor has the best array of magazines of any waiting room I've ever been in. He also doesn't keep you waiting too long. So, I have to move fast when I'm there to catch up on what's happening, wherever they say it is happening.

Apparently, this year I missed the February issue of Vanity Fair. For obvious reasons I was too busy reading about Sofia Vergara, the Colombian actress in 'Modern Family.' The modern day Charo, who apparently is as smart a business woman as Lucille Ball was. Don't know who Charo was? Look her up.

One week in this 'Thursday Styles' section the NYT excerpted some of Mr. Lee's golden memories of shopping at what they're calling the "original Barneys."

He remembers making regular trips to Barneys "nose to the glass, before splurging on a purple-and-red Norma Kamali sleeping bag coat." There's more, but you can catch the replay in John Ortved's piece in the February 18th NYT issue, where, he attaches what other "notable shoppers recalled regarding their first purchase at Barneys."

Complete with small head shots, the memories come pouring out from notables like Danny Meyer, Derek Lam, Courtney Love, and RuPaul, among many others. RuPaul's memory to me is the best because it involves a makeup brush pallet.

Their Barneys is nowhere near the Barney's I knew. Mine had an apostrophe. Okay, the late 60s are nearly 50 years ago, and this can be like someone in the Nixon administration recalling their memories of Prohibition, but Jesus, how about remembering when it was a men's store, an upscale Robert Hall?

In that era I bought Botany 500 suits, which were then about $100, with one pair of pants. Buying suits that came with two pairs of pants went away when Bonds closed, I think. Plus, if you really wanted a suit that stayed together for more than a month, you didn't shop at Bonds.

Barney's was a family business, started by the old man and later run by his sons, I think. They eventually ran into trouble when they took the place uptown and spent waaaaay too much money getting the store up and running. Asian ownership moved in, thus we have a Mr. Lee remembering his "nose pressed against the glass."

The Barney's of my memory was one that button-holed you at the door as soon as you came in and assigned a salesman to work with you. Browsing was discouraged.

I once met a salesman at Saks who once upon a time worked at Barney's in that era. I then told him this story.

You have to remember the era to remember 'The Untouchables' TV show that had recently been filling the airwaves on ABC, starring Robert Stack as Eliot Ness. The show ran from 1959 to 1963, and was very popular. Desilu produced it, an example of how smart Lucille Ball (the Lu in Desilu) was. Walter Winchell was the staccato voice-over that moved the story line along and gave it gravitas.

The Kevin Costner, Sean Connery movie version was years away. The TV show was popular and worried parents, and Italians.

Parents became worried because they felt it was exposing their impressionable young boys to the Underworld. And there was some truth to that. I bought a pulp paperback book that blazingly told of all the major crime figures that had their pictures in the post office. I kept it under the bed. When my folks found it they became worried. They thought I was aiming to become a mobster. It didn't happen.

The Italians were upset because all the mobsters in the episodes had Italian names. Capone, Nitti, Luciano, etc. Eventually the network relented and started to introduce Greek names. My father couldn't have cared less.

Barney's, like any major store, advertised. They advertised in print, and on television. One of their angles was to deflate the salesman assignment that came as soon as you cleared the double doors. They introduced the option of allowing you to just browse.

They did this by giving you, if you asked, a lapel pin that just plainly said "Just Looking." It was like a campaign button, perhaps an inch and a half in diameter. Wear the button, go downstairs, and just walk around. No one would come to "help you" unless you asked.

One of the great things about Barney's were the pneumatic tubes at the registers. Sales were completed by the sales staff stuffing papers in a cylinder and shooting the cylinder to some upstairs location to be processed. The whoosh was great. Right out of comic book.

Of course, that is if you bought something. At lunch time, myself and two of my co-workers hiked over to Barney from our 2 Park Avenue office. We tested their advertising claim, and asked for "Just Looking" buttons at the door. We got them.

As we descended the slightly spiral staircase to the lower level selling area one of the salesmen waiting in the shark tank at the base of stairs looked up, spotted our buttons and blurted, "Oh no, it's the Untouchables."