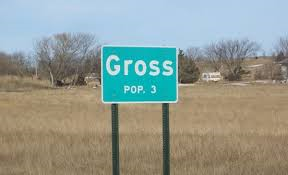 Small towns tend to stay small. Willie Nelson will always tell you that the population of his birthplace, Abbott, Texas maintains a constant population count (under 500) due to unmarried fathers leaving town as soon as the newborn's birth can be attributed to them.

Can anyone be from nowhere? No. To paraphrase the immortal Myron Cohen, everyone is from someplace. It's just that someplace doesn't always stay somewhere.

Take the just departed John-Roger, a new age spiritual leader who has just passed away in Santa Monica, California at the age of 80. Say anything you will about John-Roger, but you can say he was from Rains, Utah, a town that no longer exists.

No town is certainly a small town. Take the famous scene in the movie 'M*A*S*H' where Donald Sutherland "reviews" the troops and asks a soldier where is he from. A reply is made, and Sutherland, as he wacky surgeon Hawkeye Pierce, gleefully tells the soldier he never heard of it. Well at least it probably still exists.

But what about Rains, Utah? This means there is no one in Rains who can tell you they remember Mr. John-Roger, or Roger Delano Hinkins, the name he was born under. There is no funeral parlor in Rains to possibly pay your respects to Mr. John-Roger.

Google Earth will not come down on some rooftop of Rains, Utah. This of course doesn't automatically mean that the spot that Mr. John-Roger came from is not still there. The land it just probably incorporated into the town limits of someplace else. Rains apparently lost its ability to stay a spot on the map, or continue to be assigned its own zip code. Rains is listed as a Ghost Town.

If only all those guys who left Abbott, Texas abandoning their women and their newborns, had made it to Rains. It would probably still be around.