A Pillar of Our Community 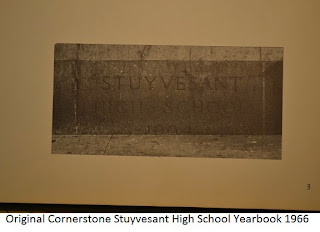 We're probably pretty familiar with what an archaeologist does. They dig for ruins. In fact, someone has just written about archaeologists, but this is not about them, or the book. It is about the urban archaeologist who documents what is in plain (or nearly plain) sight. The fellow who goes around NYC and photographs cornerstones.

Granted, this fellow's finds are not anywhere nearly as old as what someone in Crete might be exposing. By their own account, the oldest cornerstone they've photographed in NYC is from 1872, or so. 1872 is just a few seconds ago to what the sun drenched, parched digger might be working on in that pile of rock on the other side of the world over there. But, it is no less interesting.

Mr. William D. McCracken, a real estate lawyer from Oklahoma, has documented nearly 1,100 cornerstones, and is 90% sure he's gotten to 90% of them in Manhattan. The WSJ  highlighted Mr. McCracken's  pursuit in an 'A-Hed' piece in yesterday's paper. Leave it to a guy from Oklahoma, who arrived in New York City in 1997 to document what someone's dog has likely been relieving themselves on. Often for decades. (There is also a very entertaining video prepared by the WSJ. http://www.wsj.com/video/documenting-manhattan-cornerstones/ECF616A8-F598-499B-80CB-29A5DBB3ABD4.html?KEYWORDS=cornerstones)

He started his photographing as a bit of a lark, but it has now branched off into an nearly scholarly pursuit of every cornerstone, simply by systematically walking off every block in Manhattan and photographing cornerstones. So, just like someone brushes debris away from a piece, Mr. McCracken eliminates the untraveled block and puts it in the traveled pile.

A test of his 90%/90% claim was put to him when I wrote to him and asked him about the sinking cornerstone of the old Stuyvesant High School, at 345 East 15th Street from 1904. Sure enough, he produced a picture, and said it was one of the few cornerstones that's actually sinking.

I took one look at the photo and shook my head. It looks like a paste job went over it. It's been airbrushed like the Kardashians at the checkout line. Mr. McCracken credits his photo from 2008, which makes it hard to understand how they could have left such a lousy job on a building declared a landmark in 1997. The original look is above, as taken from the 1966 yearbook.

The man has spent some serious time with his pursuit. When I mentioned that I use the cornerstone of a building that was under construction across the street from where I first delivered flowers on Third Avenue back in the early 60s as a point of reference for time, Mr. McCracken was back with what he asked might be the cornerstone I was referring to.

Yes, it probably was, except that I don't remember it as a stainless steel marker that looks like something on the side of a refrigerator, but rather something that was engraved in white stone on what would be the opposite wall of the entranceway. The year was probably right, but that's of the cornerstone. What I remember was the hole in the ground where they were digging the foundation. And that was probably a little before 1963, so everything did fit.

Cornerstones apparently are not frequently part of a new building as they might once have been. Leave it to a Columbia University vice president, Philip Pitruzzello, who explained why so many of their new buildings do not have cornerstones: "We're not militantly opposed to cornerstones. Our design plan calls for a high degree of transparency and glass...coming down to the street. A cornerstone isn't...in that vocabulary." Honest, that's the quote.

This is not to imply in any sense that Mr. McCracken is taking pictures of fakes. He is just sometimes arriving on the scene after the airbrush has passed over the marker.

Every so often there might be a tale of opening the cornerstone of a building that was coming down. I remember reading they'd find newspapers from the era, or some Irish whiskey that someone was willing to part with. This is where the tales of bodies would come in. That so-and-so is a pillar of the community, having been poured into a limestone vault.

That I know of, no bodies were ever found in an opened cornerstone. Judge Crater is still missing, as is Jimmy Hoffa. But you can bet, if they or anyone else were found decomposed next to a opened or unopened bottle of Jameson's, then construction on the new building would be delayed for at least a decade.

A developer's nightmare. They might need a lawyer from Oklahoma.