There's Someone in That Tree 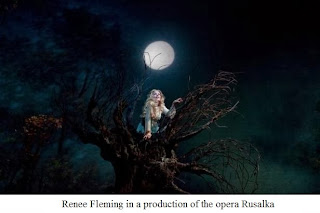 I'm not that far behind on the news, but I just read that Renee Fleming is going to sing the national anthem at this coming Sunday's Super Bowl at MetLife Stadium in New Jersey on February 2nd.

Opera singers belting out "O Say Can You See" is nothing new. Robert Merrill did it for so many years at Yankee Stadium that he should have worn a number. Which makes me wonder: what will Ms. Fleming wear?

She will look great in anything, but I somehow don't think she's going to come out like a female Springsteen, or, like a complete diva. A red coat like at Obama's first inauguration? No, like Leslie Stahl, I don't she'll repeat an outfit.

I'm not an opera fan by any means, but I first started to take note of her when she appeared on the short-lived musical show 'Spectacle' hosted by Elvis Costello a few years ago. I think she appeared with Rufus Wainwright, and Kate McGarrigle, singing a very country song about a train. It was at about this time I think Ms. Fleming put out a CD of non-operatic songs that she sings about an octave lower than her normal soprano,
'Haunted Heart.' It's become one of my favorites, along with a successor CD, 'Dark Hope.' I'm hoping there's a third one coming soon.

I've seen her at Carnegie Hall doing a piece from 'A Street Car Named Desire,' apparently an opera written with her in mind by Andre Previn. My only regret there was that I didn't know enough to yell out 'brava' for a female singer, so I just clapped.

While certainly not much of an opera fan, I've become aware of the staging of operas and the odd spots some of these people have to song from. 'Carmen' is the one opera I can say whose music I enjoy, but whose performance goes on too long. Even with two intermissions, I know I nodded off. I've seen Elina Garanca have to sing one of her Carmen arias while being carried like a board over the heads of a bunch of guys. That can't be easy.

Although, no singing seemed more challenging than seeing people doing it on the elaborate stage they built for the Wagner Ring Cycle productions. Robert Lepage's titanic, awesome contraption is a member of the cast. It is even nicknamed "The Machine." Trying to sing on that thing while it is shifting into place would seem to be like singing on top of a moving bus.

So, unless there's really something far-fetched they've got planned for Ms. Fleming while she sings the anthem, we can probably get good odds they'll play it straight and have her stand in front of a microphone rather than belt it out from the top of a tree under a full moon.