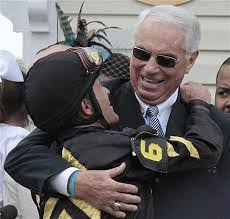 Horses can't talk. So, when it comes time for pre- and post-race interviews, the jockey, or the trainer is usually the one talking into the microphone.  This still works well, even though we don't get to hear from the athlete themselves how it felt to do whatever it was they just did. What they were thinking as they "headed for home,"

Most jockeys are Spanish, who do speak English, but sometimes just barely. After a race, they're usually out of breath, even though the horse did the running and they did the riding. There is still tremendous skill and exertion involved in steering the animal through the race.

Telecasts of major races, such as yesterday's Preakness Stakes, have plenty of people on the grounds and on the track, who can point microphones. The winning rider of Saturday's Preakness was Gary Stevens, an American jockey who can be easily understood. Gary is 50 years old, and has just come back to the sport after a retirement of several years that saw him do some acting, and TV horse racing analysis.

Gary was always a good rider, and racing, unlike other sports, inducts Hall-of-Fame members even while they're active at their craft. Gary has already been inducted into racing's Hall-of-Fame.  Trainers and owners get inducted, as well as horses, but for them, not until after they hang up the shoes.

As Gary finished the race and was corralled by the horse-backed NBC interviewer, Donna Brothers, Gary of course couldn't stop beaming and trying to catch his breath. He had just scored a major upset with Ox Bow, a horse that unexpectedly won in a wire-to-wire performance, paying a hefty mutuel.

Gary gave thanks, as most winning jockeys do. Gary mentioned loving his dad, but loving the trainer, D. Wayne Lukas nearly as much. Trainers play a pivotal role in success and failure, even though the horse does the running and the jockey does the steering.

D. Wayne Lukas has been on the major thoroughbred stage for over 40 years, winning many, many races, and many, many Triple Crown races. He is a commanding, dapper 77 year-old figure with a near full head of silver hair, usually sporting tinted glasses. He gives a good interview, and leaves a usable sound bite. If there was a GQ magazine for the AARP set, he'd be on the cover several times a year.

So Wayne, what were you thinking as Gary had Ox Bow in the lead coming down the stretch? "At the 3/8ths pole I turned to my girlfriend and told her we got this."

If I didn't think it was already too late, I'd want to grow-up and be just like Wayne.

http://www.onofframp.blogspot.com
Posted by John D. at 8:22 AM