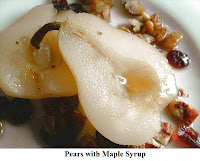 The NYT is catching up to the Quebec missing maple syrup story, while at the same time advancing details about it. The story first broke several months ago in the WSJ, and was followed up there as well. There have been three 'Onofframp' blog postings about the caper.

Details now emerging from the story in the NYT is how the thieves gained access to the strategically stored reserve. Valuable for sure, but it could not have been very well guarded. The heist, or continued siphoning off of the product, sounds very Whitey Bulger, or something reminiscent of the workings of a crew from 'Goodfellas.' They got close to it. It makes a good read.

The story gains life because there have now been three arrests, with five more expected. If Hollywood is now looking for non-violent crime to make movies out of, we may have a 2013 Christmas movie about thieves with sticky buns and sweet pears.

The resale network involved in trying to fence 6 million pounds of syrup is not fully disclosed because the investigation is continuing. But, it is conceivable that it drifted so far down the distribution chain that the gallon of syrup (Grade A, Medium Amber) I annually buy at a Mobil gas station in Fair Haven Vermont in August, on a Tuesday, when there is no racing at Saratoga, could be hot stuff.

The good news for me is that, as Lieutenant Guy Lapointe of the Surete du Quebec points out, syrup doesn't have a bar code, so it is very hard to trace if what you have is the stolen stuff. It's good to have the law on your side.

The NYT story ends with the news that this kind of thing has happened before, just not on as grand a scale. It reminds me of the scene at the end of the movie 'Hunt for Red October' when the Soviet Ambassador, Andrei Lysenko, played  by Joss Ackland, goes to the State Department official to sheepishly admit that the Soviets are now missing another submarine.

Quebec wants independence from the rest of Canada, but doesn't seem to adequately guard its maple syrup. Missiles might present a whole other issue for our taciturn, northern neighbors.