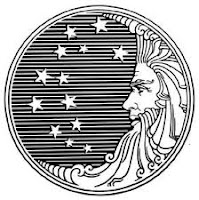 I do not have a bucket list of any kind. I've never listed all the things I'd like to see, do, or understand before I shuffle off. My life can end without definitively knowing who Carly Simon has been signing about all these years, or knowing what section of concrete holds Jimmy Hoffa's DNA.

But if there was such a list, it would now have one less item on it. I found out what the connection is between Cincinnati and Procter & Gamble.

Every so often I'd find myself checking out the logo on the side of one of their products. There you'll always find the famous man-in-the-moon and star logo that some have equated with the devil. I guess if cleanliness is next to godliness, then P&G is near Satanism because of this depiction.

Not the issue. Cincinnati is, the headquarters of a Fortune 500 company. How did this come to be, rather than in a landmark building on Park Avenue in Manhattan?

The things you learn by reading. In this case, a book review on 'The Dawn of Innovation,' by Charles R. Morris, as reviewed by John Steele Gordon in Tuesday's WSJ.

A 368 page book on the pre-Civil War industrialization of the United States would hardly seem to be where you'd expect to read about soap, but there is it. Of course, not only soap, but it's a good start.

The headline writer for the Journal has titled the book review, 'The Days of Porkopolis.' Clever, and it's not about Washington.  It turns out that Cincinnati became known as 'Porkopolis' when it became the center for the slaughter of hogs. The human population of the town grew from 2,500 in 1810 to 160,000 in 1860. Pigs were big.

Lard is pig fat, and farm wives made soap from lard and lye. My grandmother made soap from bacon fat, and she did it in an apartment on 19th Street in NYC in the 1960s. Throughout all these years I've managed to keep clean despite the solid aversion I acquired to bar soap that I saw formed in a cup.

Into this Cincinnati realm of huge numbers of pigs, lard and soap came an Irish soap maker and a candle maker in 1837 that became Procter & Gamble.

So, while a reference to a 'pigsty' might imply sloppiness, or dirt, in Cincinnati it meant that Procter & Gamble were on their way to making us all smell better.

The things you learn.