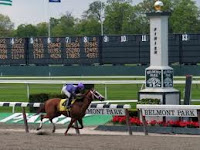 There is a day of thoroughbred racing in New York known as New York Showcase Day. It is a day in which all entrants in all the races are considered to have been bred in New York.

Definitions of the circumstances of certifying a NY-Bred have changed over the years. Variables as to where the dam stood, for how long, where the birth actually took place, the residency requirements of the carpetbagging sire, and even where the highly orchestrated conception took place, all play into the NY-Bred definition.

Lately, the requirements of meeting all the variables have been relaxed. It is not known if this is an attempt to gain the vote for New York horses and therefore restore New York State to its former Electoral College clout, but there is no telling what the legislators in New York State will do.

So, once the definition is met, there can be eligibility into any series of races on Showcase Day that highlight and consist of only New York bred horses competing against New York bred horses. They do this over various distances, surfaces, and within gender and age groups. It's almost like taking people who were born and raised in 'da Bronx' and asking them to compete in races underneath portions of the Woodlawn elevated line.

Being somewhat of a regular at New York thoroughbred tracks, I'm sensitive to seeing things I'm not used to seeing. The first clue that Showcase Day is a bit of a special day is that there are usually very full fields of horses entered in each race. Yesterday was no exception. From the vantage point of being right over the entry point onto the track one could see all the outriders gathered to lead the horses to the post parade. Since there is one outrider for every entrant, a full field means a lot of outriders.

Thus, before the first race, after lifting my head from my studies, I noticed a positive gang of outriders assembled to lead the horses onto the track. Fourteen, in a semi-circle, waiting to grab the reins of a horse and canter them up and down the stretch and then lead them to the starting gate. There were more outriders than people sitting in the section I was in. The scene looked like 'all the boys' rounded up outside the saloon, ready to be deputized as a posse before riding off to catch someone.

Overnight rains left the track in a condition declared 'muddy.' Rain and dirt will produce mud. Horses run in this goo, although some like it more than others. But mud also requires the trainers, grooms, minor officials, reporters and photographers to wade into the stuff to get their jobs done. Start the day off with the wrong choice in footwear, and you're in for a long day.

Full fields produced some competitive racing. It also produced very strung out results because not every horse entered was capable of keeping up. Thus, some of the finishes looked like high school cross-country races, with a few at the front, leading a pack of many.

But the competitiveness lead to some exciting finishes. A tight, tight, rail-skimming ride with two horses to his outside by Joel Rosario on Isn'tshewonderfull in the 4th race, helped complete a decent exacta with Jerusalem Stone and helped set the day up as profitable.

There were some other exciting finishes, but perhaps the most exciting was found in the marquee race, the Empire Classic, a mile and an eighth race that is New York's version of the Breeders' Cup Classic.

Two horses stood out from the eight entered. One was Lunar Victory, a highly capable campaigner and the favorite, who races for Juddmonte Farms, a genuine Sheik, Arab-owned outfit not known to stock its stalls with NY-Bred horses, preferring instead the more high-priced Kentucky and European bred animals.

This much was even alluded to by Lunar Victory's Hall-of-Fame trainer, Bill Mott, who said quite frankly, he didn't think anyone at the farm was aware that Lunar was a New York Bred at first. New Yorkers, it seems, can wind up in most unexpected of places.

The other horse of upcoming ability was Saratoga Snacks, a younger horse, who was looking to gain attention. Attention was already being paid because the owner of Saratoga Snacks is August Dawn Farms, itself owned, at least in principle, by the twice-winning Super Bowl coach of the New York Giants, Bill Parcells.

Bill is a long-time racing enthusiast, and has owned horses in the past. Clues to the naming of  'Saratoga Snacks' can't be found in the immediate breeding lines. The name almost seems to be a reference to a very high profile owner, Mike Repole, who made a fortune selling Vitamin Water to Coca-Cola and whose latest business ventures include producing 'Pirate's Booty,' a cheese flavored popcorn snack. Bill and Mike are sure to know each other.

The race itself came down to the two horses, who battled each other mightily down the stretch, leaving the results in doubt until very near the wire. A final urging from Lunar Victory's jockey Junior Alvarado made the last strides look easy, leaving Ramon Dominquez and Saratoga Snacks to finish a close, but clear second.

No Gatorade over Bill Parcell's head in the winners' circle. No dumping of Saratoga snacks either. At least not this time.

A modest profit was achieved, and my friend and I did what we always do after the races. We headed back to my house for a pasta dinner served by my New York, Bronx-bred wife.