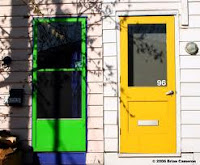 Two friends leave Saratoga racetrack on a Friday after 9 races of a 10 race card. It is the fourth consecutive racing day of their attendance at the meet, and overall they're both ahead a few bucks.

Still ahead, despite Friday's selections producing nothing so far.  There is still the 10th race, but a dinner reservation is pulling them out of the place and toward the parking lot.  Handicapping has been done, so a last ditch effort at producing a winner for the day is made by calling into an OTB account a $2 exacta box on two horses.  The personally designed and used handicapping numbers have let them down today, but one of them feels it's no time to abandon them now.  They don't want to be at the airport when their ship comes in.

A simple $2 box bet is made on the two horses earning the top handicapping numbers.  The other fellow, after realizing that while he's driving he can still get a bet in through the passenger's account, also makes a $2 exacta bet on two horses, but only uses one of the same horses the passenger does.  There's something else he likes, and he goes with it.

With telephone betting, you get an ending balance, and rapid update of funds if you hit something.  It works quite well.  So, there's an ending balance that is reflective of the two $4 bets being made.

Time is allowed to elapse. The race will be over and the winner posted before the restaurant is reached.  A simple call to check on the balance when it it is reasonable to assume that all activity is official is all it will take to tell if someone won anything, or neither won a thing.  If the balance increases, it won't be known who won, but one of the players in the car will have.  More detailed results will be obtained later.

Before the restaurant parking lot is achieved, the account announced to the owner that $117.50 has been added.  This is great news.

Further details are not sought until the next morning when the newspaper was looked at the the motel office as they were preparing to return back downstate.  So who won?

It doesn't matter. They'll both be back.