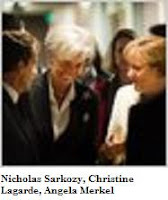 If there was such a thing as international financial baseball cards, this one would rank up there with a team picture of the 1927 Yankees.

Greek finances have been saved, and the Gang of Three seems chiefly responsible.  In fact, if they were starring in an Off-Broadway play it might cheekily be titled: 'Two Babes and a Dude.'

A picture of Angela appears no less than three times in today's New York Times.  She's Paul Bunyan, AND the ox named Babe.