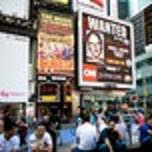 By now the news has reached many--certainly Whitey Bulger and his companion--that they are now in the FBI's custody.  There are now TWO vacancies on the TOP TEN MOST WANTED list.

I really don't know how often this happens, but it must be like there being two Supreme Court vacancies at the same time.  Certainly the Bureau wants to pick worthy successors, if only to get the most out of the lease they must have entered into for that Times Square billboard advertising that Whitey, after 16 years was still on the lam.

The billboard owner was surely looking at a good thing when approached by the Bureau to advertise a fugitive who has eluded capture since 1995. Despite Whitey being 81, I'm sure the billboard owner was licking their lips at a long-term rental.  Possibly dead is not good enough to terminate the rental.

Hopefully, the Bureau will continue to use mass marketing in their effort to keep the TOP TEN list in a revolving door status.  The real estate market is depressed enough without the rental of billboards going in the tank as well.