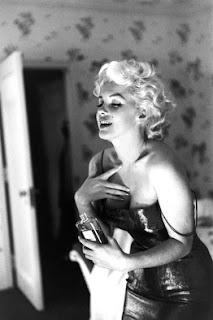 I try and read almost everything in a day's newspaper. And book reviews are included. And when there's a picture of Marilyn Monroe hawking Chanel No. 5 headed by the tag line: "What do I wear in Bed? Nothing but a few drops of Chanel
No. 5", well, attention will be paid.

Say what you might about Rupert Murdoch, the man likes print, and the man likes books, and the Review section in the Saturday/Sunday edition of the Wall Street Journal is a testament to both.

Ms. Monroe's picture appears above a book review titled 'Sweet Smell of Success', about the recently published The Secret of Chanel No. 5. by Tilar J. Mazzeo.

I don't have much of a connection to Chanel No. 5, only to remember there was a bottle of it on my mother's dresser for decades. The same bottle. Some of it must have either been used, or evaporated, but it was there, looking a bit like a small flask of bourbon, or maple syrup.

Years ago I bought a bottle for my wife, likely part of some Christmas gifts. I think it is destined for the same fate of sitting on a dresser for decades. It's there to remind me of what not to buy this year for Christmas. Been there, done that.

Pictures of Marilyn Monroe are still with us, and I suspect still recognizable even to those who were born long after her her suicide of nearly 50 years ago. I was a teenager then, and I've freely told others, even women, that I've never really gotten over it. I've been told to, "move on," but not by guys.

I closed my Tony Curtis October 2010 blog entry about a story Tony told about Marilyn when they were on the set of 'Some Like it Hot.'