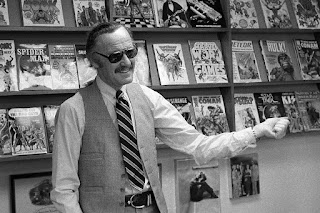 I'm not sure I ever liked the reading comprehension portion of all those tests you needed to take before they let you out of high school, as you tried to qualify for college. I can be dense with names. I often skip over them in news articles and the parts of obituaries that start to tell who the relations are and what their names are.

But I do try and follow the threads. If I come across a name in a story that I don't think has been identified in something I've already read, I dive back into the story and try and find who that person is. Invariably, I find it's a name that has already been identified early on, so there really is no mystery as to who it is I'm now reading about. I just forgot I already read their name. This is annoying, because I'm of an age where short term memory is declining a bit—just a bit—and I'm getting what I think is further proof of the speed it is progressing.

NYT obituaries are considered the Gold Standard of obituary writing. It is a deserved title. I've read, and observed that they are keen to establish who notified the paper, or confirmed the passing of the subject. They do this for obvious reason. They have been embarrassed by having reported the death of someone who it turned out was alive. This hasn't happened often, but once was too often. Confirmation is needed.

So, the person who did this confirming is usually found in the second paragraph. So and so and who they are confirmed the passing. The protocol keeps a loose end from flapping in the wind. It's tied down.

The obituary for Stan Lee, the force behind the force of adventure comics, leads off with the acknowledgement that Stan was indeed The Man. Growing up, I will admit I never liked this genre of comics. I went for Illustrated Classics, Donald Duck and Scrooge McDuck. Archie could get my attention as well. I might have been in love with Veronica. (Okay, I was.)

Comics for me in the 50s and 60s can only bring back the memory of Siegal's Candy Store on 149th Place and 41st avenue in Flushing, across the street from the Murray Hill stop on the LIRR's Port Washington line.

The corner Queens candy store was the nexus of any neighborhood. Over the years it became Lawlor & Clooney, then Angie's General Store. Newspapers, candy and lots of lottery tickets. Siegal's was a bit of a dusty place that was only half used. The store ran deep, and seemed to be a storage place for something. You didn't go into the back half. The building had been a bank before I was born, and there were still bars on the windows on the 41st Avenue side. (No longer windows now.) The building is still there, but the neighborhood is solidly Korean now. The candy store has given way to yet another deli and grocery store.

Aside from the candy counter, Siegal's could be counted on the have a full display of comic books arranged in slots on the wall. The Illustrated Classics were on a stack that I went through to get to a new title.

Newspapers were a given, and there was an assembly process when they had to put the Sunday Times together, melding all the sections as they were delivered. The Sunday papers were a big deal then. Siegal would mark on a blotter a stroke cunt of which ones were sold. He could be counted on the save a paper for you as well.

Still, a spread like Stan's gets your attention. A color image of a Marvel Comic book cover, 'Amazing Fantasy 12¢' on the front page, below the fold, followed by a page and a half inside with more color covers, a sample comic book page from the 'Incredible Hulk', a color photo of a thoroughly contented looking nonagenarian (95) Stan taken this year at his California home, and you have proof that Marcel Comics didn't need the 12¢ from my pocket to help Stan amass some bucks. Thanks to TV and movies, his creations have been popular through the decades.

I like it when I notice things that I'm reading make be pause to look for the prior reference—the oncoming short-term memory loss is not completely here yet. This occurred when reading the print edition of Stan Lee's obituary.

"In addition to his daughter, he is survived by Ms. Lee and his younger brother Larry."

The prior paragraph mentioned he only had one surviving daughter. Who is this other Ms. Lee?

I was getting all set to post a comment to Bill McDonald, the obit page editor, when I read the online version of the obit. The sentence had been corrected to read:

"In addition to his daughter, he is survived by his younger brother..."

Mr. McDonald returned with an email explaining that the unfortunate error was being corrected and that it has already been corrected online.

Newspapers correcting errors is nothing new. A later edition could always be relied on to print corrected text. But with the advent of online editions, the correction can be immediately applied. The publication might acknowledge that a prior online version had an error and that it has now been corrected. Online, the concrete never hardens.

I don't know how many editions of a daily paper the Times prints. There used to be a City Edition that would hit the Manhattan streets at 10:00 P.M; a Late City Edition, and then maybe even the Late City Edition. I was once told the number of periods in the upper left corner of the first page, where the VOL. and the No. appear were indicative of the earliness, or lateness of the edition. More periods between these goal posts, the earlier the edition.

Since my home delivery is suburban, I usually see four periods between these designations:
VOL. CLXVII....No. 58,145. Four dots. Early edition. Understandable for a suburban delivery.

I don't know what edition is selected for the digitization, or what used to be the microfilming of the paper. There have been a few occasions when I sought to look up an old edition on microfilm to confirm something I'm certain I read, only not to find it.

Take Columbus Circle. Since something always reminds me of something else, when I looked past the stage of the Mary Chapin Carpenter performance in the Appel room at Jazz at Lincoln Center venue, my view of the Columbus statute brought back at least two memories.

The first was when they built a temporary enclosure around the statue that provided a living room around the top of the column, allowing you to go up there and see Chris as if he was a very large bust plopped in your living room. It was an effective piece of temporary art that I have always kicked myself for not taking in.

The other memory that hit me was the Columbus Circle demonstration that Joseph Colombo arranged to acknowledge Italian Solidarity Day in 1971. Mr. Columbo headed one of the five Mafia families that controlled New York City but was insistent that the mob didn't exist. He campaigned for an Italian Solidarity Day to show the world that all Italians were not members the mob.

This was reminiscent of when the 1960s TV series 'The Untoucbables' was popular and all the mobsters were Italian, Al Capone clones. The Italian defamation people complained and soon after some of the mobsters were Greek. Diversity before there was political correctness.

Joe Colombo created an effective campaign, because on the day of the rally there were no pizza places open in NYC. Imagine not being able to buy a slice of pizza! Pizza on that day was as rare as a #10 envelope from a stationery store on Yom Kippur, when all the stationery stores were closed for the Jewish holiday and there wasn't yet a Staples.

Not all family members liked Colombo's idea of Italian solidarity. They didn't like the publicity. There was so much dissension in the ranks of the mob that Crazy Joe Gallo did something about it.

Crazy Joe was the subject of Jimmy Breslin's book 'The Gang That Couldn't Shoot Straight,' a tale of the Gallo fraternity in South Brooklyn, especially their keeping a lion as a pet and walking it (on a leash) so it could do its business.

Well, Crazy Joe was fairly fresh out of Sing Sing, where he recruited someone to take Joseph A. Colombo Sr. out as he spoke at the rally. Colombo was wounded with two in his head. Surgeons at Roosevelt hospital only gave him a 50-50 chance of survival. He did survive, and lived for many more years, but was basically in a coma for the rest of his life. He was 48 when he was shot.

The man who shot Colombo was a 25-year-old black man, Jerome Johnson who was wearing Unity Day identification. He was quickly dropped from behind by also receiving two in the back of the head. Only he died at the scene. It was later ascertained that Crazy Joe knew Johnson in Sing Sing and gave him something to do after his release from prison. Hire a fellow felon.

If you read the newspaper in the 70s you read about a lot of mob rub outs. The 70s put a good deal of these guys in the morgue. Well, Crazy Joe was not held in high esteem by other family members and met his demise when he was done away while having a very late night meal at Umberto's Clam House in Little Italy.

I forever believed I read that Jerry Orbach, the eventual 'Law and Order' actor, was at the table with Joey and his entourage and escaped any harm. I believe Crazy Joe's body guard, Pete Diapoulas, was also wounded. It's almost like the bit of dialogue that Robert DeNiro says in the movie 'Analyze This' when he recalls witnessing his character's father getting whacked in a restaurant. "I knew the bus boy's pants were too good."

Microfilm searches revealed no mention of Jerry Orbach being at the table. Did I read it wrong, or did it get air brushed in later editions? I'm likely to never know unless there's a retired Times reporter who reads this posting and gets in touch. It turns out at the time Jerry Orbach was very good friends with Crazy Joe and Crazy Joe and his wife were staying at Jerry's apartment when he got out of prison.

Corrections are part of the job of putting a newspaper out. Nothing wrong with that. But with online revisions it is possible to render the past not even the past.