There is something wonderful about doing well at the track. Aside from winning a few bucks, it reaffirms your faith that you can win a few bucks when you enter the gates. Just keep at it.

And so it was for two of The Assembled who made their annual pilgrimage to Mecca at the finish line. We won. Even fours days of attendance couldn't deliver a deficit. It only widened the plus side of the equation.

Saratoga continues its monetization of space.  If there's a place to stand or sit, there can be a price associated with it. The only free seating at the place after paying the general admission is from a seat at a conquered picnic table, a chair you brought yourself, or a seat in the bathroom. After that, the place has increasingly placed a price tag on nearly every way you can watch the race with your knees bent. And sometimes not.

The latest addition to this type of venue is something called The Stretch, an area of the grandstand that is so far away from the finish line that you're almost watching from Union Avenue. The sections have always been there, sparsely attended.

The landmark apartment house in New York City on Central Park West, home to many celebrities, past and present, got the name Dakota because when it was built there was nothing else around it. People started referring to it as the building in the Dakotas because it was so far away from the majority of the population in Manhattan at the time.

Saratoga already has an Oklahoma stable area and training track. It now has Dakota reserved seating.

But you know that you're going to be far away. The attraction is seating (once free) that offers a great view of the horses as the enter the stretch, on either turf course, and of course the main track. I've taken pictures from there, and it's a great vantage point. Not to see the result, but to see and hear the
horses and jockeys go by.

The Stretch, the all-new exclusive, private hospitality area features modern and upscale amenities not available anywhere else on track...

...with sweeping views of thoroughbreds rounding the final turn and entering the homestretch.

Not because of the blurb, but because I've long ago given in to knowing if I want a seat at Saratoga that's not something I brought myself, or not close to the toilet paper, I'm going to have to pay money.

The Stretch offers several price points and seating arrangements, and in my view is not worth any of them. Th cheapest seats, for $25, got us in the "sun seats" which became unbearable as soon as you sat down. The mesh seating on the chairs was comfortable, but not connected to any monitors. So, for $25 to roast in the sun and not be connected to any shared monitor, the experience was far less than desirable. Trying to sit elsewhere was rebuffed, despite the complete lack of a sold out area, by a wide margin.

The place looks nice, but is far overpriced if what you really want to do is just bet and watch racing, and maybe have a beverage of some kind.

The only bright spot was seeing some of the guys who were part of the show 'The Gamblers' that was on Esquire TV a few years ago. The show followed a coterie of hard-core horseplayers as they tried to move up in the standing of a handicapping contest. These guys were genuine.

I spotted the Rotondos in one of the tiered seatings. I recognized the son, Peter Jr. and then spotted his father and everyone else in their group that was part of the show a few years ago. I couldn't immediately remember the name of the show, so I asked the son what the name was. He was pleased to be recognized and said they had a lot of fun being part of the show.

They had to. One episode showed them subjecting themselves to a Voodoo lady who blew smoke up their rear ends (clothed). The smoke so directed was meant to create good luck. A new one on me, and I think them as well.

This monetization of Saratoga space is touched on by Teresa Genaro, (Twitter; @bklynbckstretch) a turf writer who is also a high school teacher when school is in session. A Saratoga native, Ms. Genaro is one of the few season-long writers who actually tells you something about the sport. Only the upstate papers, The Saratogian, The Times-Union or The Post-Star can be counted on to actually cover the sport live, and that's when Saratoga is open. The downstate papers no longer send a reporter to cover even The Travers. This year's edition was the first time in 149 years The New York Times did not send a reporter, instead relying on an AP summary to provide the basic information.

Thus, Ms Genaro provided a sketch of one of the winning partners, Robert LaPenta of Catholic Boy, the winner of Saturday's Travers Stakes.

We learn Mr. LaPenta's silks are the color of the college he graduated from, Iona, in New Rochelle, NY. Those colors have already been painted on the canoe in one of Saratoga's infield lakes that always show the colors of the winner of the Travers.

Mr. LaPenta has long been involved in thoroughbred ownership, going back to the days when he campaigned Jackson Bend and Da' Tara, the longshot winner of the 2008 Belmont, both trained by Nick Zito. Nick doesn't train for LaPenta anymore, and seems to have lost all his high-end clientele.

We learn from Ms. Genaro that LaPenta's yearbook described him as "More than Ready," a name he gave to the sire of Catholic Boy.

As for how The Mini-Assembled did so well I can only say the numbers were working and we started to knock over winners and exactas like bowling pins. Amnesia on how to win never seemed to break through. Freud would have been excited by that. I know we were. 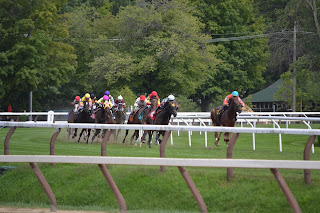 The tone for winning was set when a Rusty Arnold firster was backed in the 4th race on Monday. The 'Closer Look' comments screamed turf breeding, dam and sire. The horse was selected the night before when doing the handicapping. Concrete Rose was ridden by Jose Lezcano and was 15-1 morning line.

When I went down to the rail to take photos the horse was on the board at 17-1. When I returned to my seat after witnessing the winning move (Concrete Rose is somewhere in the scrum of horses above, with a purple and white cap; not leading by any means) my friend told me he went from 17-1 down to 12-1 in one flash. As always, no one ever bet enough on a winning horse. But any money on a winning 12-1 shot is always nice.

We closed out our four-day set not with a bang, not with a whimper, but with a Wow, even though we had no money on the winner of the e West Point, the 10th race on Friday's card.

Understandably, money was on Chad Brown's turf specialist, Offering Plan. The odds were low, but he was played with a few exactas and even triples since this was the Aloho race, and I was ahead.

It was good field of New York breds that even included Kharafa, a war horse if ever there was a war horse. Kharafa hadn't won a race in two years, and was now nine years old. We joked amongst ourselves that they should retire him. He's won over $1.1 million, had 12 wins in 49 starts, and was always somewhere near the finish, but couldn't get it done anymore.

I remember another turf horse from a while ago, Fort Marcy, who competed into an advanced age,  always showing up for top tier races. But when it came time to make a move, Fort Marcy no longer had it. He seemed senile, if that's possible. The owner Paul Mellon and Eliot Burch the trainer retired him.

Kharafa was 6-1 morning line, but drifted, up to 17-1 due to apathy. The horse was low percentage, and the trainer, Timothy Hills was also low percentage, with eight wins on the year. There were no wins visible for Kharafa in a ten race past performance. There was no obvious appeal. But, if you looked closely to the Closer Look it was revealed Kharafa seemed to like this race, The West Point, finishing 3rd twice and a close second, in the 2013, 2016 and 2016 runnings..

Still, with the others in the race, his chances looked like 17-1. Dylan Davis was on him. Dylan is a rapidly improving jockey, son of the jockey Robbie Davis, that you can rely on. We bet him years ago at Saratoga when he was a bug boy and felt he was the only speed in a mile and an eighth race. "Take the lead Dylan." When he did, we just yelled, "don't fall off." He didn't.

War horses like Kharafa usually tend to be geldings. No change for breeding. But when they can stay on the circuit and win, they become betting and fan favorites. There was one years ago, Peat Moss, who could run massively long races with massive weight assignments.  One of Peat Moss's legs had been fractured and reset with a multitude of screws. The x-rays once accompanied a story about him.

The next day, when we told our waitress Annie at the breakfast place we go to, Poopie's in Glens Falls, that we were making fun of Kharafa before the race, and then he goes and wins, she told us, "see, you should have bet him rather than making fun of him." If only things were that simple.

We spent our last two days in The Fourstardave venue, easily the best value at the track for reserved seating and closeness to the action. A Dixieland combo with two dancers stopped by the NYC Mac 'n' Cheese Truck just outside our seats and provided some nice entertainment. I'm sure they made the rounds of the place, maybe even stopping by The Stretch.

So, will we be back?
Next question.