Ever have your picture taken? Silly question to ask of anyone who is living in an era when people are pointing phones at themselves to record themselves in front of something, or with someone. Selfies.

Certainly passports and drivers licenses bear an image of you. But if the police take your picture it is a mug shot and is because they suspect you did something. One of the most ironic of these mug shots is the picture of Kitty Genovese, the unfortunate woman who was stabbed repeatedly one night in Kew Gardens in 1964, in a crime that became synonymous with witness apathy, when it was erroneously reported that 38 people witnessed the stabbings and did nothing, called no one.

In the documentary 'Witness' Kitty's younger brother Bill, who spent years sifting over the events and producing a film, explains that the widely circulated photo of Kitty, seen above, after her murder was when she was arrested for holding numbers receipts, policy slips. Her brother explains that a close look at the photo reveals the lanyard that was around her neck that held the arrest number, name, and other identifying information.

It just shows you that whatever happens to you, there can sometimes be a mug shot that is hauled out to identify you.

Take today's online story by the NYT reporter Dan Barry, who gives us a great piece, complete with mug shots of the Rogues Gallery that was part of NYC policing in the late 1800s. It would seem Mr. Barry's muse for the article might be his watching 'The Alienist' on TNT, the mini series version of Caleb Carr's 1994 novel of the same name.

It is a dark series because it was a dark book, that took over 20 years to hit a screen of some kind. But the depictions of New York in the late 1800s are so enthralling that anyone who has their eye on the city's past can't wait for the next episode in the series.

In the story, the New York City police are faced with a serial killer of boy prostitutes. The groan of the precinct's floors leave you thinking you are transported to the era when Theodore Roosevelt was the head of the police, not the commissioner per se, but President of the Police Board. An appointed do-gooder. A "goo-goo" in the parlance of the day.

The muse bites Mr. Barry well enough that he collects an array of mug shots and gives us a story about the police detective Thomas F. Byrnes who starts techniques that add what would be considered modern procedures to the usual ones of beating suspects into confessions. Confessions, absent eye-witnesses, were the one means the police secured convictions. The forensic incriminating evidence was just germinating. Fingerprinting was only just gaining traction.

Of the few comments Mr. Barry's piece produced there is a great one from New York's current Chief of Detectives Robert Boyce, who tells us Detective Byrnes could have a place in his office today, but would have to reform his interrogation techniques.

Another comment is one that can only be considered astounding. A reader from New York, Narcieri, tells us the woman shown on the left at the beginning of the article is their grandmother's aunt, Sophie Lyons. Narcieri doesn't tell us why the mug shot was taken. There is no caption to the picture in the article, so one might assume Sophie's mugshot might have been framed and placed on the mantle or piano in an ancestor's home. Your mug shot defines you.

Not all mug shots taken by the police are official records. In one of my first blog postings I tell the story my son-in-law's father, a retired NYC detective, told at one Christmas gathering of the technique his mentor used to keep crime down in the precinct.

When he encountered a neighborhood trouble-maker who he wanted to make a crime deterrent impression on, he took the subject to Woolworths. Woolworths was everywhere, so no one had to go far.

Woolworths had everything including what today we would call taking selfies. There was always an instant photo booth where you could get a wallet-size strip of black and white pictures taken of yourself, or yourself with others, serious, joking, sticking your tongue out, whatever amused you, for a quarter. I think today these booths can be hauled out at weddings. Why I don't know.

Tim's mentor woulds plop the subject down in front of the booth's camera, extract a quarter from the subject themselves, and take a series of photos for his own mug shot collection. He would write identifying things on the back of the film strip and tell the now 25¢-less miscreant that if there was any trouble, he'd know who to look for.

The number of laws this would now break would be considered a field day for a defense attorney, but back then, the 50s and 60s, it was "community policing."

And since everything reminds me of something, I emailed Mr. Barry to tell him of the book 'Least Wanted' a 2006 collection of mug shots compiled by Steidl Kasher and Mark Micealson. 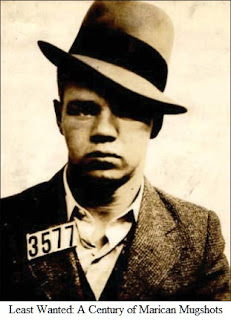 The mug shots are from all over the country, usually of those who were not famous then, and who didn't become famous after, the 'Least Wanted.' No Billy the Kid, John Dillinger or Patty Hearsts here. Most of the photos have no captions, but are explained in the back.

Clearly the photos are from a bygone era, but some are accompanied by their index cards that give height, weight characteristics, and any other significant features, like tattoos, scars, etc. One of my favorites are three pages of photos accompanied by pink index cards. The crimes? Communist and Communist (Red Literature) Source of the term pinko-commie? Likely.

Not all the photos are accused of petty crimes. There is one suspect whose crime bears an eerie resemblance to the perpetrator of the Ettan Patz murder.

The mug shot for G.B. Westel, a waiter, also known as Franz Joseph at Rankin's on the Bowery is a suspect in the murder of Katie Tritschler, a 8-year-old girl whose "terribly mutilated" body was found in a cellar at 203 First Avenue, NYC on July 25. There are newspaper clippings accompanying the photo of the suspect, but it is hard to determine a year. However, the digital Times archive tells us it is 1907.

And while most of the crimes are of the variety of what I guess would now be called "quality of life," like "contraband dice, weapon and obscene pictures," there is one for someone who certainly was not 'Least Wanted.'

There is a mug shot of Bruno Richard Hauptman, age 35, carpenter, who was arrested on March 19, 1934 for the kidnap and murder of Charles Lindbergh's son. A dapper Bruno, photographed on September 21, 1934 in NYC, is seen in a double breasted suit with shirt, tie and hat, standing next to a measuring stick which would put his height at 6' with his hat on.