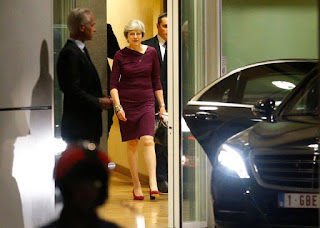 A thoroughly stunning Theresa May, Prime Minister of Britain, is seen leaving through what appears to be a lower-level doorway to an awaiting limousine after meeting with European officials in an effort to bolster Brexit talks. Apparently, the Brexit news only gets worse, as the prime minister fights to keep the Brexit talks from collapsing entirely.

As in peril as the talks might be, you can't tell that from the prime minster's wardrobe, a sharp looking burgundy dress stopping at mid-knee level, accented by red shoes, and a chunky piece of jewelry on her right wrist. The perfectly coiffed Ms. May is striding confidently through the door toward the limo's awaiting open door. She's on the move.

And she has now once again pulled a length or so ahead of her rival, Germany's Chancellor Angela Merkel, for the title of the World's Most Photographed Woman with Clothes On.

Both women have been busy lately, and somewhat out of the camera's lens, this despite Chancellor Merkel's fourth election victory and the looming deadline for resolving how Britain is going to handle no longer being part of the European Union 18 months from now.

The times may be a changin', but the ladies are approaching the wire with style.