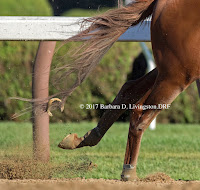 There are several reasons why I like horse racing. There is the continuity of tradition. There is the chance to actually make money while being a spectator, an interactive spectator. At a ball game there can be enjoyment, but are you ever going to leave the ball park with more money than you walked in with? Think about it. And then there are the stories that come out of the track. Human and equine.

Yesterday's 90th running of The Whitney (formerly a handicap race) at Saratoga gave everyone more than the winner, Gun Runner, the overwhelming favorite who didn't disappoint, winning in a credible time of 1:47 3/5 for the mile and an eighth, but also an added story of the winner finishing the race while wearing a horseshoe from a rival.

Gun Runner didn't start the race with Cautious Giant's shoe caught in his tail, but he certainly finished the race with it clearly dangling stubbornly in the tangled hairs. Gun Runner's trainer, Steve Asmussen later reported he had to pull out some of Gun Runner's tail hairs just to finally get the horseshoe off the tail. Barbara Livingston, the Daily Racing Form's chief photographer extraordinaire caught the image in the above photo.

The TV cameras caught it, and eventually everyone at the track knew that Gun Runner was carrying a spare shoe back to the winner's circle. Cars have spares, so why shouldn't horses? And since Gun Runner didn't start the race with a stray shoe dangling from its tail, no change of equipment needed to be announced. The race was declared Official.

Horses lose shoes during races, not often, but it happens. There are even rare occasions where it is announced that a horse might be running without shoes. Why this occurs, I do not know, but I have heard the announcement.

So, how did this happen? Well it seems Cautions Giant who took the lead with the intention of being a rabbit for War Story, took the lead and threw a shoe, perhaps at the half mile pole, or maybe a little sooner. With Gun Runner close by, the shoe flew up and got tangled in his tail. It must be said that Cautious Giant has to be the world's slowest rabbit. A rabbit in a race is a horse intentionally entered to run fast on the front end, hoping to tire the favorite out, and set the race up for the other half of the entry.

Running a half mile in :48 1/5 seconds makes Cautious Giant the slowest rabbit to ever practice the tactic. Famously in the series of races between Damascus and Dr. Fager, Damascus's trainer Frank Whitely Jr. entered Hedevar to soften the Good Doctor up, It worked. But Hedevar was a fast horse to begin with, holding the world record for the mile at the time. A rabbit that creates a traffic jam is not really a rabbit.

Gun Runner wasn't done in by the "rabbit" and wasn't done in by carrying the extra weight of an opponent's horseshoe. The official Daily Racing Form chart of the race makes note of the thrown shoe, and the "bride" who caught it. It really was good luck.

Horses go around a racetrack, but money, cash, makes the racetrack go round. Consider the photo Tweeted out by the @LRFRacingClub, showing a Del Mar money room employee holding 10 stacks of $100,000, making her truly look like a million. 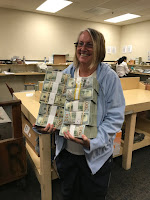 And who is on the $100 bill? Why Ben Franklin of course. Getting Benjamins at the track is the highlight of any day. Catching a foul ball or a home run might be nice, but catching a few, or a fistful of Benjamins, is the best. Money won is twice as nice as money earned

And does anyone out there know of a famous quote from Ben regarding horseshoes?

Think of poor Richard III in the Battle of Bosworth.

King Richard III lost his kingdom for lack of a nail as he was losing the battle and enemy troops were closing in around him he said, "My horse, my horse, my kingdom for a horse."

We can see how having a horseshoe is considered lucky.