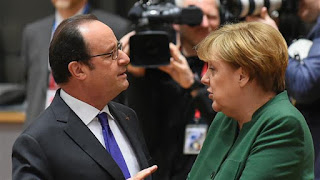 The ladies who are unwittingly competing for the title of  'The World's Most Photographed Woman with Clothes On' haven't been seen much of lately. Germany's Chancellor Angela remains in the lead, despite some recent appearances by Britain's Prime Minister Theresa May. France's Christine Lagarde, the Managing Director of the International Monetary Fund, remains solidly in third place, several lengths behind the front running duo.

Chancellor Merkel extends her lead a bit by appearing in Brussels yesterday, and is seen here with French President Francois Hollande.

The Chancellor is in Brussels more often than I am in the bathroom after going to bed for the evening. A lot of this has to do with the simple fact that Brussels is the headquarters for the European Union (EU). The EU of course is what the British have filed divorce papers on, with the remaining nations trying to figure what life is going to like without the Brits after their voter-mandated Brexit, British Exit, takes full effect in two years.

Chancellor Merkel is seen here in her customary solid colored pantsuit. Without either of the other two ladies in sight, Chancellor Merkel inches ahead once again in the race for the title of 'The World's Most Photographed Woman with Clothes On.'