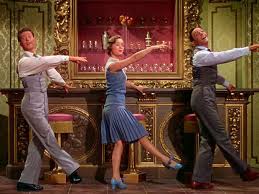 The death of Debbie Reynolds the day after her daughter Carrie passed away proved to be enough news to provide the media with plenty to so. Daughter/mother back-to-back deaths. Show biz. Cue the video. Death by broken heart, etc. Two days in a row the NYT carried front page obituaries, Carrie, then Debbie, pictured with daughter Carrie.

Live to be 84 like Debbie Reynolds, and still commanding attention in the entertainment world is quite an achievement. Even without the day-after-link to her daughter, Debbie Reynolds deserves the attention she got.

I remember the father of the brothers I became friends with in the mid-60s, commenting on the Radio City Rockettes, who actually went out on strike. This was the mid-60s, and the father, Sidney Piermont, was a CBS-TV producer, working on the Garry Moore and Carol Burnett shows.

His background was show business, having been a booking agent for Loew's vaudeville talent. From this he vaulted into doing USO shows in North Africa during WWII, actually getting a Purple Heart for a shrapnel wound from a bomb that exploded nearby. His second wife was Mike Todd's secretary, Marjorie (Susan) whose red hair--ginger--was an instant attraction.

He may not have been 'Mr. Broadway' but a letter once addressed to him, only giving Times Square as the address, once reached him. He was a judge at the 1945 Miss America Pageant that awarded Bess Myerson the crown. Bess's New York roots and his own weren't enough however for him to vote for her. His vote went elsewhere.

Sidney was a Toots Shor regular, and his sons remember being introduced to all kinds of people at Toots's, sports, entertainment and mobsters alike. Frank Costello stopped by the table to say hello.

The point that's going on here is that Mr. Piermont was from a show business era that coincided with that of Debbie Reynolds, and others. So when the Rockettes went out on strike he shook his head that dancers could even be unionized. He said to get into show business you once had to be able to "sing, dance and act." Do all three, or take a hike. Like any era, things were changing.

Considering Debbie Reynolds's career, you can certainly say she had all three. As did Janet Leigh, Rita Hayworth, Marilyn Monroe and many others who you might now be watching on Turner Movie Classic-like cable stations.

The Reynolds obit tells us she had never even danced professionally before her role in 'Singing in the Rain,' matching moves with Gene Kelly and Donald O'Connor at the age of 19, shown above. Perhaps not professionally danced, but she certainly knew how to dance. And consider the saloon dance scene in the movie 'The Unsinkable Molly Brown.'  Who do you think could do that these days?

Yes, part of an era where you had to, "sing, dance and act."