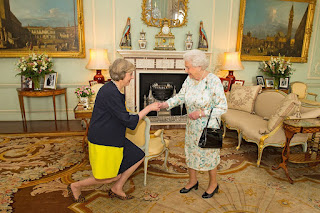 This picture appeared front and center on page one today of the Wall Street Journal. Theresa May, Britain's new prime minister was received by Queen Elizabeth II at Buckingham Palace, the royal residence in London.

Prime Minister May is seen giving the Queen the respectful courtesy curtsy, a "deep curtsy" as described by some. The Queen is holding out her right hand and smiling cordially as she greets the new prime minister, Britain's second female prime minister.

The room looks like some sitting room, or living room at Buckingham Palace. Neither the Queen or Ms. May are wearing outerwear, or coats of any kind. But the Queen is seen as holding her purse on her left forearm. The handbag is a simple looking black leather purse. Did Ms. May catch the Queen just before she was on her way out for shopping? Was she unexpected? What's with the purse on the Queen's arm walking around her own living room? Is carrying a purse indoors somehow tradition in itself?

You have to go back a long way, but sometimes I manage. The Queen reminds me of Joan Rivers when she was starting out as a comic and catching the eye of Johnny Carson, who at the time liked her a great deal. Joan was on his show often as her career was taking off. There Joan would be, coming out from behind the curtain, acknowledging the audience and carrying her purse with her to the armchair guest seat for her chat with Johnny. Her purse was quite similar to the one seen in the picture. It was the oddest thing. A woman appearing on TV with Johnny Carson, constantly carrying her purse.

I don't think the purse was ever discussed. Joan never opened it to put things in, or take things out. If she got up to leave, or slid over to the coach to allow other another guest to chat, she of course took her purse with her. It was not going to be left behind to have someone say something if they saw something, even then.

Was the Queen headed for a British talk show? Perhaps Graham Norton, or whomever might he big over there? Was she holding onto her purse to prevent Prince Philip from filching through it to bet a few bob on the races at Newmarket? Was she keeping tickets to the final round of the British Open in there, hoping to surprise someone in the Royal Family with front row tickets to the stands at the 18th green on Sunday? Was she keeping medicine close by?

Joan and Johnny are of course no longer with us. Theresa May is just now stepping into worldwide limelight as a new prime minister. The Queen of course has been the Queen for over 60 years and is now over 90. She's holding on in more ways than one.