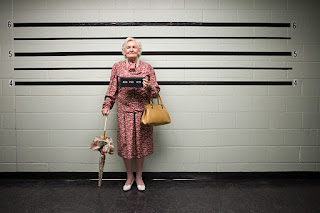 I owe the following news referral to a Twitter connection with a journalist in Brisbane, Australia, @JustJenKing, a freshly minted journalist who in mid-life left being an OR nurse and became a digital media specialist for an Australian news outlet.

Following the Bloomberg News link will take you a story that is in effect an comparative study of crime as committed by the elderly throughout the world. I particularly enjoyed the story because it closed the thread of the recent jewel heist in Britain, as well as provided a memory resuscitator for a bit of a bygone life.

Basically, the story revels how the elderly in countries other than the United States seem to resort to crime. And not just garden variety shoplifting, but major, crew oriented crime like the recent jewel heist in London, where the elevator shaft was shimmied down and  high powered drills were used to cut into a vault. We've seen this in movies, but always played by a cast of relative youngsters. The youngest of the British crew of nine was 42, with one topping out at 74 with diminished hearing. He might have been the lead driller.

I've always found heists fun to read about. Generally, no one is shot at, and the thieves get away--for a bit. Perhaps my fascination for these crimes springs from the 1964 Murf-the-Surf caper where Murf placed a simple ladder against a window of New York's Museum of Natural History, popped open a display case, and made off with the Star of India Sapphire. The biggest (and easiest) jewel heist to date

My father and I went to the museum after the caper and I distinctly remember looking at the tall, double hung window and imagining a ladder leaning against it outside, and someone making their way inside to the display area holding a flat blade screwdriver. Sort of like being locked out of your house.

Murf was more than colorful, and of course there was a movie made about him. He was considered somewhat benign, having of course spawned a huge security industry. He was fun, until he was wanted for murder.

The story gives another example of a German ring of thieves who were just trying to top off their pensions and avoid life in a retirement home. If orange is the new black, as one TV show tells us, will Sing Sing be the new extended care facility?

Where the average age of criminals seems to be rising in other countries, the trend apparently has not hit the United States. No reasons are given for this, but it has to do with money, sex, TV and drugs.

I distinctly remember during NYC's  Koch administration accompanying a co-worker at lunchtime on a quick trip to the Executive Volunteer Corps, a collection of elderly business people who were corralled by the city to offer advice to budding entrepreneurs and small business owners. This is long before Silicon Valley and venture capitalist funding. A PC was nowhere in sight yet.

There were significant public service ads in the subway leading you to a second floor expanse of space near Grand Central Terminal on 42nd Street. Looking back, it was also indicative of when the portion of 42nd Street was somewhat threadbare, and a city's rental of space was likely for a song, compared to what the rent would be today.

I distinctly remember my co-worker and I being the youngest people in the place by a divisible factor of nearly three. My friend was always thinking he was going to come up with an invention of some kind. Why he thought this I always got a kick out of, because he never actually made anything, but merely thought about making a mint doing something. At least Ralph Cramden and Ed Norton on 'The Honeymooners' had a product to offer. My friend had ideas. But hey, you got to start somewhere.

With absolutely no waiting, we were met by a 70-something female receptionist, who led us to a 70-something gentleman in a suit and tie who explained to my friend some of the approaches to starting your own business. We were seated in hard, slat-back wooden chairs, at a vast wooden desk, an arrangement that was repeated throughout the floor plan. No cubicles then. This was where a municipal purchasing agent's inventory went before it went to Weissberger storage. There was a great second- story view of East 42nd Street and barely moving crosstown buses.

He pointed to a shelf of books, and gestured toward another gentleman who could give very specific advice once my friend had a few more specifics to disclose. With both of us being relatively young, I wondered if the whole Corps thing was just a way to give these people health insurance. And maybe it was. Maybe it kept them away from jewel heists.

The story points out the that the upward age-creeping bracket for criminals is not trending that way in the United States. There are no reasons given for his, but I can easily offer a few: money, sex, TV and drugs.

The close of the story talks of a 74 year-old co-defendant who slowed up the getaway with constant pit stops for peeing. This is not the case in the United States. As anyone who watches the national edition of the evening news should know by now, if you've got ED, Erectile Dysfunction, or, as the boys call it, "can't get it up anymore," then it is entirely your own fault. And if you can't complete a round of golf without pulling your putter out in the rough at every hole, then that's your fault too. There are cures for this, and American advertising budgets and TV make the cures known.

If you've ever been varnishing a chair with a classy looking 50, 60-something lady whose ashes haven't completely gone out and you don't get the urge to put down your brushes, then it is your fault. Las Vegas is in one of the 50 states. It exists no where else. The point is: with a little pharmacological assistance, which the US has a abundance to offer, you don't need to be bored and resort to crime to pad out your sunset years.

Take the recently released Blythe Danner (72), Sam Elliot (70) movie, 'I'll See You in My Dreams: Life Goes on, Go with It.' Why slide down an elevator shaft and risk going to prison and meeting a geriatric Bubba who wants to make you his girlfriend, when you might be able to have a meal on the back of a boat with Blythe?

I know what I'd choose.