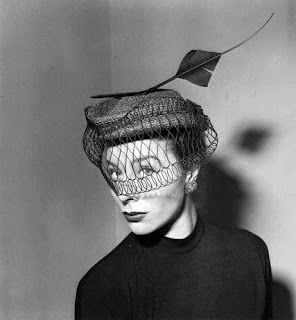 Someone in my household upset the stacking order of the pile of newspapers I was trying to get to. The result has been that I'm making the same slow pace through them, put not getting to the older ones any faster. If this makes any sense, I'll be surprised, but it turns out I just got to the March 4th edition of the NYT the other day where it was  revealed that Bettina Graziani, 89, a super fashion model of the 1940s and 50s had just passed away.

In reading Ms. Graziani's obituary I was immediately pleased to note that "most photographed" was recognized as long ago as 70 years ago. She was recognized as having a certain style as projected through her personality. And despite never having met the woman, or even having heard of her, we'd have to agree.

Anyone who can pull off a look wearing a hat that's a cross between a Brittany coast fishing net underneath an Alexander Calder mobile and not make you laugh, even 70 years later, deserved to be famous.