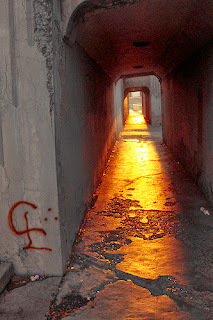 What's a bagataway? Is it a joke, as in: "what's a henway?" About five pounds.

I've never seen or heard the word. But apparently John Updike thought it was a great word choice in 1956 to describe the gait of New Yorkers on Fifth and Sixth Avenues as he wrote in a 'Talk of the Town' column in 'The New Yorker' magazine about going from the Empire State Building to Rockefeller Center without once walking on either Fifth or Sixth Avenues.  To me, it is significant that Sixth Avenue, named 'The Avenue of the Americas' after WWII would be referred to as Sixth Avenue, even by 'The New Yorker.' No one has ever called it 'Avenue of the Americas' except City Hall and the post office.

The mid-50s were Updike's years at 'The New Yorker' as an employee. He was fairly freshly from Harvard and a small town in Pennsylvania when he hit the big time as a staff writer, filing copy directly to the editor William Shawn.

The first biography of John Updike, 'Updike' is by Adam Begley, and was first read about in 'The Observer.' The reviewer, Mark Kassel, spends a good deal of time discussing what he describes as Updike's best known 'Talk' piece in "which the author expertly navigates his way from the Empire State Building to Rockefeller Center--all without stepping foot on an avenue." Mr. Kassel offers an Updike observation: "Fifth and Sixth Avenues teem these days' the thronging pedestrians maneuver under rules skimpier than those of bagataway."

Perhaps an alert reader with a valid 'New Yorker' magazine subscription will oblige me in my quest. I did get to read what must be part of the piece from an entry found online. It confirms my initial thoughts as to Updike's route: walk through the Empire State lobby, cross 34th Street in the middle of the block, and then go into the department store Orbach's and pop out on the 35th Street side..." (No longer possible. Orbach's has been turned into an office building and the guards might try and stop you.)

'The Obvserver' piece recommends the Updike bio for invoking the bygone parts of New York. The viewable online posting gives the route away:

Talk story about a walk from the Empire State Building to Rockefeller Center that involved no contact with either 5th or 6th Avenues. Our reporter started from the Cantigny Printing & Stationary (31st St.), through the Empire State Building, Ohrbach's, Meyers Brothers System parking lot, & under a wire fence at 36th St. Through Herald Square Garage to 37th St.; then via subway tunnel to 38th St. Next through Lord & Taylor's, Schumacher's, Bryant Park, Woolworth's to 43rd St. Several arcades lead to 44th St. Describes the rest of the buildings, basements, etch. he had to walk through to reach Rockefeller Center.

Immediately, I have to wonder. The Empire State Building is still where it was in 1956: on the west side of Fifth Avenue, from 33rd Street to 34th Street. (It doesn't however occupy a solid city block. Another game: name the buildings that do.) How Updike got from 31st Street to 33rd Street without mentioning something after Cantigny's makes me wonder. Maybe Cantigy's ran through the block, starting at 31st, but then that could only deposit you out on 32rd Street. A block south of 33rd Street.

Maybe Updike means he really started on 32nd, or 33rd Streets? I never knew Cantigy's, but I can't be sure what he meant.  All I know is the place didn't exist literally through 32nd Street to 33rd Street.

It's just native carping, I know. Something like taking issue with Admiral Peary's claim to have found the North Pole. Or, Grand Central Terminal vs. Grand Central Station. It's still a great premise, and does remind me of how my friend and I got in out of a very heavy rain and closer to Madison Square Garden (the current one) by literally cutting through all aspects of St. Francis of Assisi church in order to stay dry. Every time I'm on that block, I think I'd like to try that again.

Observant people new to Manhattan, and from small towns, love to describe what they see in Manhattan. I remember a newspaper reporter coming into Manhattan for the first time who marveled at how people kept popping up out of holes in the sidewalk. A lot of people. He thought we were a population of gophers.

And how through personal sonar and radar, we don't seem to bump into each other. We don't even sideswipe each other. Bats.

But "bagataway?" No luck in my print edition of the shorter version of the OED. Online, Merriam & Webster wants to send me to an expanded 300,000 word reserve they have that may help make me a paying member of their online service. No thanks.

I did find it seems to refer to lacrosse. So, I guess to the fresh-faced Updike, what looks like skittering all over the place, reminds him of lacrosse. Whatever.

My own poetic rendition of watching people in New York always occurs when I look either north or south from the west side of Fifth Avenue at about mid-block, at the low spot between 43rd and 44th Streets. In either direction, a lunch hour, or rush hour crowd lit by the sun is "a sea of bobbing heads."

One of the best examples of urban spelunking was graphically depicted in a 1970s edition of 'New York' magazine that showed how you could travel underground from 31st Street and Eighth Avenue to Rockefeller Center.

By using upper and lower levels of Penn Station and its then connection to the PATH trains on Sixth Avenue, subway, and other pedestrian tunnels, it was thoroughly possible to do this.

Unfortunately, the access directly to the PATH trains from Penn Station has long been sealed off. It was a dark trip, but extremely handy. It did take you past Gimbel's and their bargain basement (no access), huge fire doors, and past a usually closed, cluttered stamp and coin storefront (greatly missed) behind a stenciled glass door.

Post-911 New York does not offer as many street level, or underground shortcuts. But the ones you can still find and use are always cherished. Especially when it is raining.

http://www.onofframp.blogspot.com
Posted by John D. at 9:11 AM