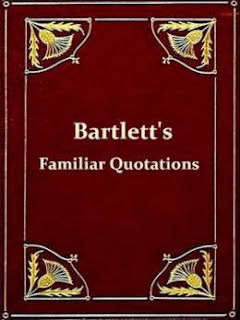 I'm only up to owning the 15th hardcover edition of 'Bartlett's Familiar Quotations', edited by Emily Morrison Beck. Thus, I do not have access right now to the 16th and 17th editions that the recently deceased Justin Kaplan edited. However, I am not going to let that hold me back.

Everyone has got at least one quote they feel should be in Bartlett's, and they are all probably right. The following might be in an edition of Bartlett's, but not likely, no doubt because the person who said it, to the best I can tell, is not identified. I plucked it from a book review on Tammany Hall, the great political machine that built huge parts of New York City and kept construction workers, bankers and prosecutors busy for decades.

The book is, 'Machine Made,' by Terry Golway. The book review, in a March 10, 2014 edition of the Wall Street Journal, is by Edward Kosner.

Mr Kosner excerpts one of the apparently few humorous anecdotes from the book when it is reported that when a long-time chief of the organization, a hard-drinking bail bondsman named Murray Hall passed away and it was revealed he was really a she who had been a lifelong cross-dresser, a friend of Mr. Hall's quite succinctly paid his respects: "She's dead, the poor fellow."

Even unattributed, maybe that will make into a future Bartlett's edition.