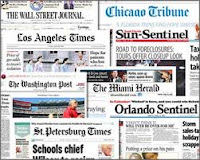 Quite a few years ago I remarked to someone who was older than I that my father didn't spend much time with the newspaper. What I meant by that was that it didn't take him long to read it. He went front to back in no time. The NYT. Whereas myself, reading the same paper took me a good deal more time. I landed on more stories to read.

The person I told this to completely understood. Getting older meant not being as interested in the same things, because they are the same things. The names have changed, the clothing looks different, but it's really the same story they read years ago. Thus, there is more to skip. Been there, read that.

Now that I'm the same age as my father was at the time, and the person I told the story to, I find myself skipping a good deal of the newspaper, even though I go front to back.

The past few weeks have incredible for skipping things. Add the things I'm not interested in to the things I've grown weary of, and you've got a very short read in front of you.

Tennis: U.S. Open. Two weeks or more of skippable stories and results. Pages and pages in the sports section of the NYT. Have absolutely no interest in tennis. Tried to learn how to play 40 years ago and never got past a few lessons, which were actually held at the tennis courts in Grand Central Terminal.

Political Conventions: Either one, have grown weary of the same old thing by either party. The conventions are choreographed love fests that hold no surprise. I once did follow politics, but after the 2000 presidential election don't know the electoral vote counts or any numbers associated with the election. Someone will win, and we'll endure.

Food: Restaurants, recipes, what to do with truffles and drizzles of olive oil. No interest, but the pictures can be nice. I eat well enough, and don't starve.

Fashion: Never see anyone who is wearing what they're writing about. Male or female. Learned yesterday that the new editor of Cosmopolitan, Joanna Coles, 50, was wearing purple geometric Prada pants, a black Preen English top and black Givenchy heels when she was being interviewed for the story.

She's an attractive woman who probably shouldn't be wearing clothes with the labels on and the boxes nearby. How the reporter learned who produced what she was wearing is a mystery to me. I wouldn't be able to tell if a man's shirt came from Brooks Brothers, Paul Stuart, Saks Fifth Avenue, or Wal-Mart. The story caught my eye because it was in the Business section. Honest.

Real Estate: I have a home. Not interested in buying or selling. Don't know anyone who is. I know all about the neighborhood.

Obituaries: Death is common. Happens to everyone eventually. Yet, this is the section I can get the most out of. Sure, death happens every day, but it only happens once to the people they write about.I love to read stories about the eras they lived in, and what they did, and what they won't be doing any longer.

The only sad thing about obituaries is that we get too many of the distinguished deceased. It's hard to relate to a Nobel Prize winner, or award winning film directors. It's been over a decade now that the great obituary writer Robert McG. Thomas, Jr. left us and with that, his uncanny ability to find the Goat Man, the champion duck pin woman, the fellow who invented kitty litter, and any number of worthy candidates we can relate to. Luckily his work lives on in several books. It just doesn't get added to.

Sports: With Internet available results, sports reporting has certainly changed. We know the score. There is less to read, but more to view. The Olympic coverage was extensive, but ultimately of little interest. Splashing in the water, diving, and gymnastics do nothing for me. Track is interesting, but there are really only a few events worth paying attention to.

What I was happy to learn was that there really is an American female volleyball player who is named Destiny Hooker. This gave me great relief, since I now knew Don Imus could say her name and not get reprimanded by Reverend Al Sharpton and ultimately suspended from his job.

Finance: I've got a few bucks, no longer work, and if I paid attention to all those analysts, advisors, pundits, consultants, and soothsayers who write about it, I'd be pretty much wiped out by now and pulling the newspaper out of the garbage can.

Arts: There is interest here. Film, theater and book reviews are interesting and helpful. Who gets to be praised, who gets to be buried. Music is sometimes interesting, but basically filled with names of people I'll never be interested in hearing, or seeing at obscure venues that can't be reached by cab.

Science: Can be interesting, but generally health slanted with stories about what the worried-well should think about. Fuhgetaboutit.

Home: Furniture I'm sure the cat wouldn't even go near. I have a couch, a bed, lamps, chairs and tables. We're fine.

Weekend: I know what I'm going to be doing.

Time to get started.