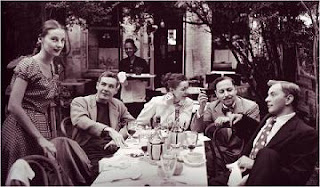 In handicapping thoroughbred horses there is something known as a ‘key race.’ A key race is defined as one that sees two or more of its finishers go on to win their next race. It’s a race that subsequent winners can be associated with. It has handicapping meaning because the quality of the finishers is so good that they go on to win other races. Somewhat like a graduating class that produces a president or senator and maybe a Nobel, Pulitzer, or Oscar winner. A lot came out of it. So, talent by association, any other horse that did well in a ‘key race’ might now do well when asked to run again. Look at the winners that were already produced.

The above picture has appeared in obituaries of I think at least three of the people either in the picture, or the one who took it. It has now most recently been freshly displayed because the man second from the left, Donald Windam, has now passed away at 89.

It’s an artistic, literary crowd enjoying a lunch or summer dinner at what looks like a completely charming place that likely no longer exists in Manhattan. Something in an E.B. White story. It looks like the Court of the Two Sisters a bit, in New Orleans. Outdoor dining. Certainly a private party, or a late lunch, because no one else is around other than the server. Someone knows the owner.

People in the photo might be recognizable to some, but just in case, left to right: ballerina Tanaquil Le Clercq, Donald Windham, artist Buffie Johnson, Tennessee Williams and Gore Vidal. It is well composed, and is evocative of an indolent time when no one looks like they’re in too much of a hurry to do anything, just four years after the end of WWII. Renoir’s 'Luncheon of the Boating Party.'

Each person in the photo seems to be playing either to the camera, or to someone else in the group. It is after all, an artistic New York crowd. It is the kind of picture that I bet most of the people in it had their own copy of, displayed somewhere in their house or office.

The photo reminds me of one that was taken of my father, his uncle, another fellow from the flower market, John Lekas, and two women who have remained unknown to me. The photo was taken when the “new” flower shop was opened in 1956 and the group of five is posed inside by the front door. It’s a good black and white photo, taken by someone I’ve also never known. The photo hung in the front that shop until it closed in the 70s, then disappeared into some relative’s hands who had no business having it. Have never seen it since.

Inclusion in that Café Nicholson group photo seems to have conferred notoriety and longevity on those in it. Somewhat true of the flower shop photo.

One of Mary Chapin Carpenter’s early songs is titled ‘Come On, Come On’, about a photograph taken of her parents in Paris when they were just starting out. She points out that she’s now older than they are in the photo.