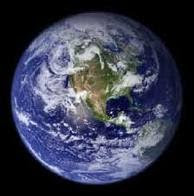 I know this because the calendar says so, and there were some hand-outs at the job to remind us. A somewhat large corporate emblazoned tote bag made from recycled Rice Krispies, and a rubber ball with rough approximations of the continents were distributed early this morning. Most of the world's land masses were on the ball--Greenland for instance--but not Iceland. They're going to get blamed for a lot with that volcano.

Oddly enough, today I passed the through the part of Manhattan where I saw the first evidence of how someone was celebrating, or acknowledging Earth Day. Years and years ago there some some kind of "earth" shoe store on 17th Street, off Irving Place, that specialized in a special kind of shoe that was supposed to let you walk as if you were barefoot. All the back-to-nature people would line up outside the store and wait to get in. Kaslo, I think. Some kind of shoe from Sweden.

It was in this area in 1970, not quite a full year after we put a man on the moon, where I came across the first Earth Day sentiments on the back of someone's jacket--letters carefully formed by masking tape:

Fuck the Moon
Fix the Earth

The shoe store is long gone, and so are the people who would wear taped sentiments on their clothing. You wonder if they're acknowledging the day today.