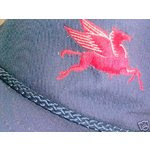 “When pigs fly” is an expression used when it is desired to tell the listener that the likelihood of whatever it is you’re talking about has as much chance of happening as when bacon and chops takes to the air. (It’s amazing what three small words can stand for. Of course, “No” is even shorter.)

But horses do fly. Generally thoroughbred horses. Not on their own of course, but they do when they’re cargo in a plane and are being transported from one place to another when entry in a race is involved. The distance is generally sufficient enough that van travel is impractical, or there is an ocean involved. Shipping quality thoroughbreds to certain races has become fairly common. One trainer, D. Wayne Lukas, got so good at spotting entrants in races they could conquer that his prowess was acknowledged by a handicapper's rhyme that went, "D Wayne off the plane." This meant, if Lukas shipped, then you better pay attention as to why.

Quality Road is a quality thoroughbred that was recently shipped to California from the East Coast to compete in the Breeders' Cup Classic, a race of such importance that generally the winner emerges with tons of money, increased value in breeding rights, and is generally thought to be cinch for Horse of the Year honors.

A fair amount of time was spent trying to coax him in. Eventually, because he was delaying the start by being so temperamental, the other horses were backed out and he was given a chance to enter again. Nothing worked. This happens, and when it does, the horse becomes scratched, or taken away from the gate and does not run. A major disappointment to his owners, connections, and fans who thought he had a good chance to win. The scratch produces betting refunds to the bettors who used him in their wagers.

A few days after the disappointment, it was time to go home. In this case, Kentucky. Quality Road has flown before. He was flown out there. He's raced in New York and Florida. He's been around a bit.

Turns out Quality Road became Rain Man, the sometimes excitable character Dustin Hoffman played so well in the movie of the same name. He wouldn't get on the plane. Wouldn't, didn't, plain and simple. They spent 5 days vanning him (Quality Road on the road again) back to Kentucky. In his own way, he went Greyhound, rather than American.

What we don't know is if someone mentioned Quantas to him, or if he even thought about it himself, but just couldn't bring himself to be Mr Ed, the talking horse. Quantas has never crashed. Quantas goes to and from Australia. And there is quality racing in Australia, although comparatively not as many races.

If I ever get the chance to name a horse I'm not sure what name I'd use. I really don't know if Pegasus has been used before.