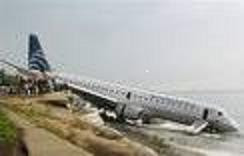 All the digitalization and all the microfilm lookups couldn't reunite me with something I know I once read.

It was a great vignette, written perhaps for an earlier edition that was later eclipsed by the one they use for keeping records. It surely was on the front page, but in its preserved state it slid from the front page to the first page of the second section. No one was killed.

Plane Slids Off a Runway at Snowy La Guardia, the headline of March 3, 1994 proclaimed. All 115 passengers and crew were evacuated with some minor injuries to a few. It seems the pilot aborted the takeoff, but the plane kept going on the icy runway, dipping the front into the mud and water of Flushing Bay. Runways at La Guardia are notoriously short.

Late, dark, cold, wet, it was quite a scene. But everyone got off the plane. A man waited around for a few hours, wondering what to do. Would his luggage be available? Was there going to be another flight soon?

But New York can ignore you, sometimes so much that even if you're a plane crash survivor there's no one to tell you what to do. No direction, a complete unknown, all alone, certainly not a rolling stone. The gentleman, after putting in a few hours of wonderment finally grew weary and took a cab back to Manhattan and checked back into the hotel he had checked out of.

At least when you survive a plane crash, there is still tomorrow.